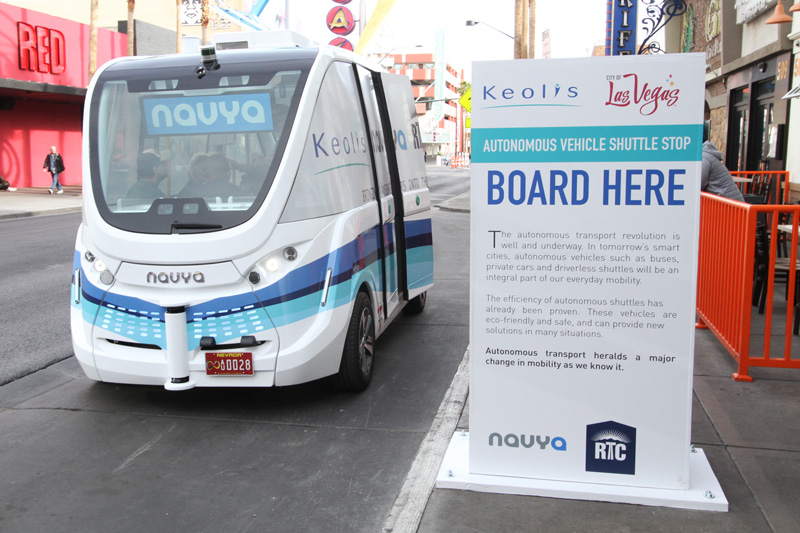 Guests can ride the first autonomous shuttle ever to be deployed on a public roadway in the U.S., and it’s free!

Best part of a driverless vehicle? No tipping!

The self-driving shuttle is a partnership between NAVYA, Keolis and the city of Las Vegas.

Las Vegas Mayor Carolyn G. Goodman and other officials were on-hand at the launch of the shuttle service, the beginning of a week-long pilot program. The pilot program runs Jan. 11-20, 2017.

The shuttle carries up to 12 passengers, and runs on battery power.

“All aboard!” Or whatever the autonomous shuttle equivalent of that is.

The autonomous shuttle is a blast to ride! It pauses at crosswalks and stops at intersections, and uses sophisticated GPS and sensor technology to avoid pedestrians and other vehicles.

For the pilot period, a representative of NAVYA (the company that developed the shuttle) will be onboard at all times, mainly to comfort those who perhaps aren’t completely comfortable with a driverless vehicle.

If you’re up for a ride, just look for the “Board Here” signs.

A little disappointing for people looking for actual boards, but they’ll manage.

There’s always something new and fun to do in downtown Las Vegas!